That is right Dear Reader, I am making the jump, Starting Monday February 6th I will be a Sr. Consultant with Pragmatic Works.  Over the last year I've gotten to know quite a few of the people that work with Pragmatic Works.  As a company and as individuals they are staples of the SQL Server Community.  If you've been to a SQL Saturday, SQL Rally, 24 Hours of PASS, SQL PASS Summit, or countless other SQL related gatherings you have undoubtedly come across someone from Pragmatic Works.

"So Balls," you say, "Sr. Consultant does this mean you're no longer a DBA?  Are you now jumping ship to become a Business Intelligence guy?"

No worries Dear Reader, even though DBA isn't in my official title I'll be up to my elbows in all kinds of DBA goodness!  A big part of what I'll be doing is working with other DBA's and clients with DBA issues.  Now let's jump right in. 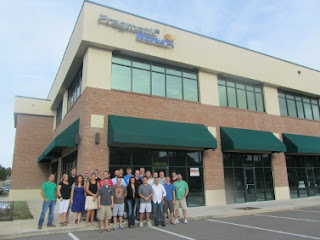 I mentioned Simon Sinek (@Simonsinek |Website) yesterday.  I was introduced to him by my now fellow Co-worker Tom Brenneman (@TomBrenneman).  If you haven't watched Simon's How Great Leaders Inspire Action TED Talk, take a  break click on the link here.  I'll be here when you get back.  It's good stuff.  Heck it's amazing.  If you're like me when you watched it your mind was exploding with ideas and possibilities afterwards.  Take a deep breath, now back to your regularly scheduled blogging.

You are on your game today Dear Reader.  I believe at our core we as people all have something that we want to fundamentally believe in. Along the way of life I picked up a simple oath, "To Believe in the Life of Love, To Walk in the Way of Honor, To Serve In the Light of Truth.  This is the Life, the Way, and the Light".  Simple words, but I found I believe in them.  I believe in Love, Truth, and Honor.  When we were kids there were things that we wanted to do, not because of a paycheck, not to get ahead, but the things WE believed in.  We believed in those things so fiercely that they shaped what we wanted to become.

I found that I really liked working with Computers, and so that became my major in college (eventually), and that was the field I went into (eventually).  It's a little hard to draw a parallel there.  At the best of times I like my computer, at most I'm happy with it, I certainly don't love it.

What I found was I enjoyed learning, and I was in the right field for it.  Heck I didn't just enjoy it, I found I loved it!  Later I got to mentor and work with others.  When I saw them grow and learn it filled me with a sense of pride, but never so much that I didn't hold dear to the idea that I always have more to learn.  Eventually I got to the point where I would learn on a topic and I would get to educate others on it.  That led me to begin presenting on topics internally for the places where I worked and to the people I worked with.  Then last year I started presenting to the community, I started blogging, I started volunteering, and most importantly I stated participating.

Doing so I started finding things that I really loved.  I love speaking, I know I'm weird but I like getting up in front of a room and talking about something technical.  I love teaching.  Jumping in to situations where I don't know a lot about an environment and I'm learning on the fly to overcome a critical system outage, almost as fun as white water rafting.  There is a certain Truth to unabashedly teaching, to not withholding information.  When I've worked for a place I've taken great efforts to make sure that when I leave they know what I know, documentation, information, scripts, you name it I want them to have it.  If I have to keep something from you in order to seem important, then what I'm doing is wrong.  In our business Ideas are important, but recognizing that People have to think them, and that People are more important is critical.  And finally if you act with Love and Truth towards others, there is no way that you cannot be perceived as Honorable.

So Why am I going to work for Pragmatic Works?  Because I see a company that believes in empowering people through education and technology.  I see a Company that uses the Pragmatic Works Foundation to train the unemployed and helps Veterans transition to technology jobs after they leave the service.  And not only do they help train people, but they hold recruiting fairs, they work actively to place people.  To top it all off they started doing this during the HEIGHT of the Recession, when our economy was at its worst.  When profits were at an all time low for others, Pragmatic was giving away two free seats in each of its training sessions to an unemployed technology professional.  I see a company that not only believes in the SQL Community but actively encourages it's employees, and offers incentives, for them to participate.

In short my Why is because I believe in Love, Truth, and Honor.  And I believe in what Pragmatic Works is doing as a company, and I'm very excited to participate.

WHO BETTER TO LEARN FROM 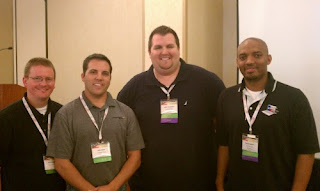 I attended the Pre-con that Pragmatic Works did for SQL Rally.  I have sat in their presentations, and I have learned from them.  They are SQL MVP's they are Instructors for the SSAS Maestro Course that is as close to a Business Intelligence MCM that Microsoft Currently has.  If you were going to learn about SSIS you would be hard pressed to find people more qualified than Brian Knight, Mike Davis (@MikeDavisSQL|Blog), and Devin Knight (@Knight_Devin|Blog).  From a DBA perspective there are top notch SQL guys like MVP Jorge Segarra(@SQLChicken|Blog), Gareth Swanepoel(@GarethSwan|Blog), and Chad Churchwell(@ChadChurchwell|Blog).  If SSAS is your bag then I would point you no further than Mr. Adam Jorgensen(@adam_jorgensen|Blog).

I cannot say enough good things about this team, and there are many more amazing MVP's and MVP caliber people that I haven't listed.  At Pragmatic I will learn How to be the absolutely best technology specialist I can be throughout a wide range of Microsoft technologies.

Throughout all that learning I'll be Consulting, Teaching, Presenting, and Blogging.  I'm very excited to get started, and I hope you will come along as I explore this next phase of my career.  Until next time Dear Reader.