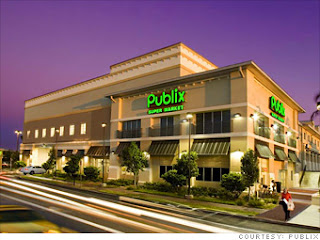 It's been a little quite here at SQLBalls.com Dear Reader, but business is about to pick up.  There are a lot of changes in store for this year.  The very first of which is that Friday February 3rd 2012 will be my last day working for Publix.  Working for Publix has been a tremendous opportunity for me, and I have grown professionally in ways I never dreamed of.  When I left Virginia for Florida Publix was the company I wanted to join.  I knew of them, but not a lot about them.  The more I learned about them, the more I would come to love them as a company.

That Dear Reader is an excellent question.  And one that we will address tomorrow.  For today I wanted to take a moment to say Thank You to Publix. 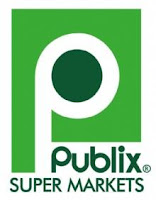 Publix is a Fortune 500 Company in size and in Capacity, it has been in the Fortune 100 Top Places to Work for 15 years in a row.  The concept is simple one.

Back in the early 1900’s a Man named George Jenkins was the youngest manager in Piggly Wiggly History at the time.  He was quite successful.  So successful that the President of Piggly Wiggly had told George that if he had any idea’s he could drive up to Atlanta and share them.  George was a man full of ideas and he set out on a trip to discuss how they could revolutionize the grocery store business.  In those times it took 2 days to travel by car from Fl to Atlanta GA.

When George arrived he sat waiting outside of the President’s office.  He saw men in suits enter and over heard some of the conversation.  At that point the President’s Secretary walked over to George and said that, They were too busy to meet with him that day, and he should just drive back down to Tampa and come back some other time. 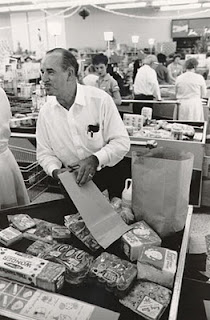 The conversation that George had overheard was about the Golf scores they had shot the previous day, and the course they were planning on going to that day.  Needless to say the 2 day drive back down to Florida proved fruitful for George, but not for Piggly Wiggly.  George decided that he wanted a place where every Customer and every Employee would be valued above all else.  That the cost of doing business would not come at the cost of serving the customer or employees.  George quit Piggly Wiggly and went on to found Publix.

True to his word the very first year that Publix was opened the company ran into the red.  The reason it lost money that year?  From the very first day George issued stock in the company to every employee, and paid a dividend per share.  Goerge felt that if you own something you would put more work into it, and from the bag boy up to the owner he wanted everyone to feel pride in their business.  That continues to this day.  Publix is the largest Employee owned company in the United States.  As a matter of fact the only way to get Publix stock is to work for Publix. 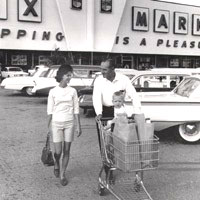 When you start with Why great things happen, go watch Simon Sineck if you don’t believe me.  Why, George believed that by Serving people and his Employees that everyone would benefit one another.  How, he would make that the standard and offer Premier Customer service.  What, George just happened to open a grocery store, that went on to become a multi-billion dollar company, dedicated to this day to become the “Premier Grocery Store” in the world.

Publix was founded during the Depression, at a time when new business shouldn’t succeed.  When many established businesses went under.  George used to get a ride to work with his butcher because instead of buying a car, he spent his money on a delivery truck for his store.  He was at every opening of every Publix when he was alive.  And there are pictures of him bagging groceries and walking customers out to their cars to load them.  The week he died, he had stopped in old store #1 like he did most weeks.  To say hi and see how things were running.  If you live in South Carolina, Tennessee, Georgia, Alabama, or Florida you will be able to find a Publix.  I would highly recommend that you stop by and see what George built for yourself.

I don’t care how many times I’ve said it, or how many times you hear it The People make a difference in where you work.  At Publix I have worked with some of the smartest and most dedicated people I have ever met.  It is a very common thing at Publix to run into someone who has been with the company over 30 years.   There are many who still remember the founder of Publix, Mr. George, affectionately and share stories of him.

One of Publix motto’s is “The People Make the Difference”.  And it could not be more true.  Whether it be the individual at a store level that goes the extra mile, the people from Corporate and Manufacturing that load up their own trucks to get supplies to Stores and Customers affected by hurricanes, or the many late nights that the IT staff put in to see that the Store Systems that make the Customer experience so seamless continues to keep working.  It is the people.  The People that work at Publix tirelessly devote their time to charitable efforts without looking for glory or recognition.  Their work with the United Way and in sponsoring children and families during Christmas are two that leap to mind immediately.  But you don’t have to look much further to find men and women that are active members of their Churches, Volunteers for Boy & Girl Scouts, Board Members of State Colleges, and servants of many other fine organizations.

But that is a big body of people.  I worked on the DBA team, specifically on the SQL DBA Team.  The men I worked with are some of the finest DBA’s I’ve ever worked with.  I learn constantly with them, and they have no shortage with which to teach.  When you manage over +3000 SQL Server Instances (Almost 4000) you have to be at the top of your game, or things go wrong.

I could write a profile on each member of the team and offer glowing reviews and recommendations based on their knowledge of Internals, Optimization, Troubleshooting and Performance Tuning, High Availability and Disaster Recovery.  They are people that I have learned from, gained amazing insights into managing SQL Server, received amazing Scripts from, they even helped me move!, and I had many  wonderful personal conversations with.  Needless to say I look forward to keeping in touch with them, because they are amazing individuals that I hope will be life long friends.

So I want to take a brief moment to say Thank You.  Thank You to all the people I’ve worked with.  To the DBA’s that I spent late night’s and weekends with Thank You.  To the Analyst, Programmers, Data Analysts, and Managers Thank You.  To the co-workers that encouraged me to speak at events, sat in them, and offered me constructive criticism Thank You.  I am better for having worked with you and I wish you all nothing but the best.

So now Dear Reader I would like to say to you, Publix will be hiring in the near future.  As you can tell from my glowing review, I think this is a wonderful place.  An opportunity has arisen that I just cannot pass up, and that spells Opportunity, What Opportunity are you looking for, for you.

Here is the link to the job posting on the Publix Website, click Here.  Good luck to you if you decide to  apply.  And Thank You Again Publix.

Email ThisBlogThis!Share to TwitterShare to FacebookShare to Pinterest
Labels: Personal, Publix, Thank You