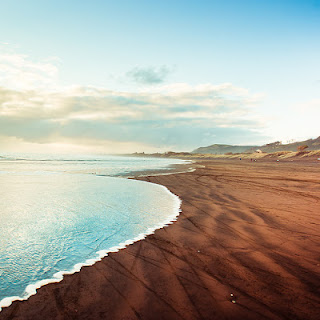 Hello Dear Reader, I’ve been working on a series for BIDN.com, the Business Intelligence Developers Network, on how to read a Data Record.  I’ve always wanted to take the time to go rummaging around in the internals of SQL Data Records and this was my shot to do it.  If you are interested please feel free to read Part 1 Tag bytes, Part 2 The Null Bitmap Offset, Part 3 Fixed Data, and Part 4 The Null Bitmap.

While I was working on part 4 I found that the results that I was getting for the Null Bitmap were a bit different than what I was finding on the blogosphere and the Intrawebs.  I was reading the blogs of some very smart people, so that lead me to one conclusion: I was doing it wrong.  So I started following their examples and comparing the results and well….there’s only so may ways you can type DBCC PAGE before you start thinking maybe I’ve found something.  I was working in SQL 2012 so my first thought was that it changed there.  So I stood up a VM with SQL 2008 R2 on it and I got the same results.  So then I stood up another VM with 2005 and Viola! I was looking at results just like everyone else.  So then I stood up ANOTHER VM with 2008 RTM and once again I was back to what I was initially looking at.

Sorry for the Ramble Dear Reader, what I found was that in 2005 when you translate the Null Bitmap if you had a number of columns that doesn’t divide easily into 8, (The Null Bitmap is one byte which translates out to a map of 8 individual bits, and you get 8 whether you need them or not), instead of using 1’s for unallocated bits they use 0’s.

I understand not exactly a jaw dropping conclusion but if you’re a geek like me that likes to dive into internals this should be a fun read. 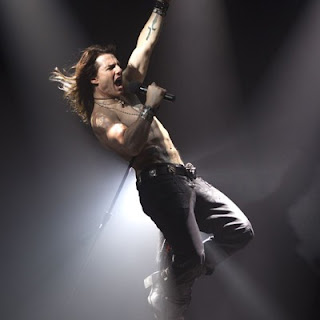 Now that we’ve got our table and a record inserted let’s use DBCC IND to find our page.

Remember type 10 is an allocation page and we want a data page or a PageType 1, we see that Page 288 is our candidate.  Now let’s use DBCC Page to get page 288, don’t forget to turn on Trace Flag 3604.  I’m only going to copy the relevant bits from our page dump and remember your page numbers may differ.  I’m using SQL 2012 for this output.

Here in Red, Green, and Bold (sorry to anyone who is color blind hence the bold…), is our portion of the record slated as our Null Bitmap.  0500 is the first two bytes of our record, remember two numbers equal a Hex pair.  Our Pairs are 05 & 00, they are flipped so you would read them as Hex 0x0005, which translates out to 5 and we do have 5 columns.  Don’t forget to use our handy Hex to binary convertor, http://easycalculation.com/hex-converter.php. The last portion of the record is the Null Bitmap itself 1c.  In Hex this works out as 0X1c and converts to binary as 00011100.  In order to read this binary value accurately we flip it and it becomes 0011100. 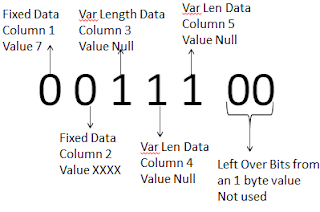 We break this down per column, because we have two columns that are not null three Variable length columns that are null and then the remaining two 0’s are not in use.  So why are they are you may ask?   Because 1 byte equals 8 bits, and these are left over bits.

Now this is one of the differences that I’ve noticed from 2005 to 2008 on up, in 2005 the left over bits where marked as 1’s.  Let’s take a look real quick to back that up.  I set up a VM running Windows 2008 R2 and SQL 2005 Straight up RTM no Service Packs applied.  We’ll run the exact same scripts as above and look at the Null Bitmap output.

Now that we’ve got our table and a record inserted let’s use DBCC IND to find our page. Notice we use DBCC IND with a -1 if you attempt this with the exact same script as above you’ll get an output error for dump style 1.

Remember type 10 is an allocation page and we want a data page or a PageType 1, we see that Page 153 is our candidate.  Now let’s use DBCC Page to get page 153, don’t forget to turn on Trace Flag 3604.  I’m only going to copy the relevant bits from our page dump and remember your page numbers may differ. 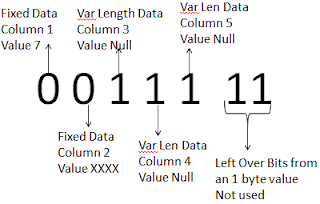 Since it was introduced in 2005 then there I’m sure there was a good reason to change it in 2008 and up.  My guess is that instead of masking as columns that where just there of offset the bitmap some logic is used based on the number of columns and the bitmap to determine how much of the record remains to be read.

Whatever the case a lot of the documentation I came across regarding this all pointed to the unused bit’s being labeled as 1’s.  That through me for a loop at first and I just wanted to toss this out there to anyone else searching on the subject.

Thanks for stopping by,