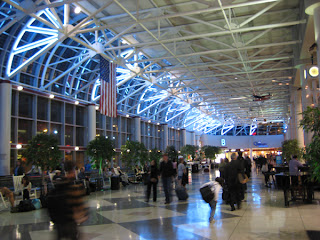 Hello Dear Reader!  Ever try to convince someone that they should be paying attention to Twitter?  A co-worker, Vice President of something or other, CMO, CEO, or CIO?

I’ve had conversations over the years with many people as to why Twitter is important to their business.  If they don’t have a dedicated “Social Media” guru or their Corporate and Legal Policies do not yet “allow” an official Twitter presence, they can still effectively market, and monitor marketing, using Hash Tags.  It’s a way of dipping your toes in the water without really diving in.

Alas most of the conversations revolve around what “real” results they can gain from Twitter.  Most lack the vision or understanding to see how it could benefit them.  Tying a dollar amount to Twitter can be difficult.  Most companies don’t track or publish earnings related around a Twitter campaign.  They do with traditional advertising, but with social media it’s hard to tie a dollar amount to it.

I was a little busy yesterday with work.  Like most days I poked my head out on Twitter and checked several new sites.  I even received some push updates to my phone via USA Today, Fox News, and the New York Times.  So Imagine my surprise when this morning while standing in line at the Starbucks in the Charlotte airport that I see this.  Twitter Terror Hoax Rocks Wall Street, AARRRUUUU? 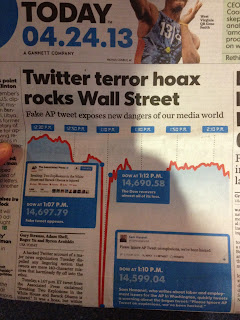 Learning about social media occurrences the next day via the new paper.  How old fashioned.  Loosing 200 Billion dollars over 80 typed characters, not so old fashioned.

Twitter first came out I laughed at it.  Why would anyone want to have a website version of Instant Messenger, remember AOL, limited to 140 characters?  Turn around several years and I have firmly flip flopped, Oxymoron, and have drunk the Twitter Kool-Aid.

What changed my mind?  Becoming a presenter in the SQL Server Community.  I went to my first SQL Saturday and caught the bug, read TSQL Tuesday #41 Becoming a SQL Server “Presenter” GETINVOLVED!  One of the things I did was examine the really good speakers and see what they were doing.  They blogged, they were on Linked-In, they were on Twitter.  So I did all of that.

Only after the fact did I find #SQLHelp, the hashtag that allows people to ask whatever SQL question they have and get free advice from some of the Top SQL Talent in the world.  There were situations where I had production outages and we, my fellow DBA’s and managers, used Twitter to post questions and get deep technical answers quickly.

At 1:07 pm, East Coast Time, the Associated Press Twitter account, currently suspended, was hacked.  The 80 characters contained within the Tweet typed by the hackers seemed particularly potent given the turmoil of the last week.  “Breaking: Two Explosions in the White House and Barak Obama is injured”.  I’m not alone in my conversion, apparently the people trading on the New York Stock Market follow the Twitter as well.

By 1:09 pm the Dow had fallen over 137 points.  While it rebounded quickly, 1:12 pm when Sam Hananel (@SamHananelAP) Tweeted, “Please ignore AP Tweet on explosions we’ve been hacked”.  The market corrected.  But did it? 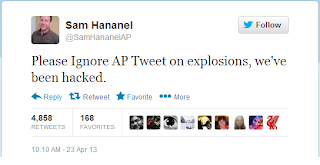 My Dad does a lot of day trading.  He’s studied up on it, and I’ve learned a tiny (very tiny) little bit about it vicariously through him.  You can take options out on Stocks termed calls, where you bet they will over or under perform.

Based on their performance you get your money back and a little extra.  The most notorious case of this came during 9-11 where some nefarious people had bet on the airlines to lose money.  In regular terms though this is used daily, sometimes you win, sometimes the company you bet on wins.  It's part of our system.

*It’s a lot more complicated than that, but we’ll stick with the very basics.*  Think betting, but using the stock market.  There are also automatic options that you can set through e-investing web sites.

Another way that people could have lost money on this?  Using automated software to monitor stocks.

Quick example, I like Disney.  So I go buy some Disney stock.  Disney is a non-essential good (basically).  They make entertainment, theme parks, dresses that my daughter likes to wear, movies my kids like to watch (DAD include on this).  I don’t NEED Disney stuff.  We get it with disposable income.  We NEED food.  The mortgage HAS to be paid.  Electricity, need that too!  So when there are hard times disposable good take a hit.  Look at the stock market when 9-11 happened, the Mortgage Crisis, and other such events.

So I buy 100 Disney stock at $35 a share for $3,500.  If something happens and Disney stock drops $10 per share, I could set up a pre-arranged sell order.  At $25 sell it all.  Let’s say the stock market tanks Disney stock because a Hacker gets into their official account and announces “Disney to go bankrupt, 10,000 employees to be laid off immediately”.

My Stock dips down to $23, while I’m at work.  My e-banking software kicks in and sells all my Disney shares.  My money is down to $2500 and I’ve just lost $1000.  When it is correctly reported that Disney is not going bankrupt and is having a record Quarter beating all earnings estimates, and the stock now corrects to $40 a share, I’m no longer a stock holder.  Not only did I take a loss, but I was out on the Win too.

I just lost $1000.  I just missed out on gaining $500.  There is no customer service department.  No receipt to be returned.  I’m out.  The market was correctly reported.  Based on my input a sell order happened.  Potentially A LOT of sell orders from all sorts of people happened.

WHAT DOES THIS MEAN Security and Reality.  First Security.  It means some real people lost real money yesterday.  We’ll have to see what the fallout of this is.  It also means that if you do have a Corporate Twitter account you probably need to look at changing the password every 90 days, and using something like KeePass to manage your password.

Warnings aside it also means we can now put a dollar amount on Twitter.  USA Today estimated that $200 billion dollars in broader market capital was lost when the Tweet occurred.  The market rebounded and that capitol was regained, with some people suffering losses.

Before I could even finish writting this blog, there was a new story.  SEC, FBI probe fake Tweet that rocked stocks.  And another Twitter working on two-step authentication.

Now Reality.  The financial world is following Twitter and most other forms of social media.  The importance of effectively using this channel to communicate with customers and the world at large is only going to gain importance as time goes on.  The most expensive Tweet in the world so far is now worth $200 Billion dollars.  How much will the next one be worth?