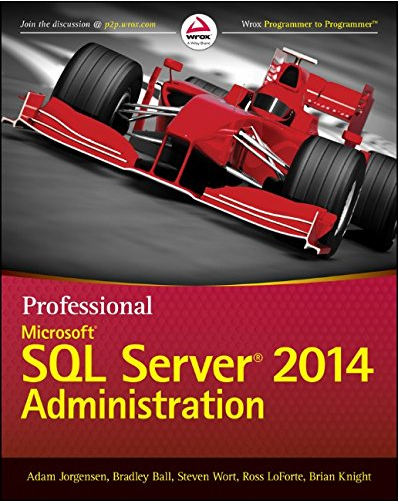 Hello Dear Reader!  Last September I was approached with a tremendous opportunity to become the Managing Author for the Professional Microsoft SQL Server 2014 book by Wrox.  We worked throughout the CTP phase and solidified the book after RTM.  By the end of July all the pages were in, all the chapters proofed, and we all had a collective sigh of relief.

The initial goal was to just update the book.  It quickly became a project to gut and replace old ideas with newer material, a vision that continued to grow and should make the next release of the Pro Admin series drastically different even from this book.

I couldn't be prouder of this crew.  Roger Wolter is a former PM from Microsoft who helped write Service Broker, and has done some of the largest and most interesting implementations of it in the world.  You will see his handy work on Chapter 6 on Service Broker and Chapter 8 on Securing the Database Instance.

I worked with Jorge very closely before he joined Microsoft.  He is an amazing guy, with a thirst for new knowledge.  Jorge took Chapter 1 on the SQL Server Architecture and 24 on SQL Server Azure Administration and Configuration.

Kathy Vick a former Microsoftie with two tours of duty, who has been working with SQL Server since it was still called Sybase prior to 4.2 has Chapter 13 on Performance Tuning T-SQL and Chapter 14 on Indexing your Database.

Bradley Schacht did more than can be mentioned for the BI side of the house in this book.  He wrote Chapter 23 on SQL Server and SharePoint Integration.  Chad is a smart and amazing PFE for Microsoft.  He joined at the last moment us to take over Chapter 16 on Clustering in SQL Server 2014 and provided a quick and solid contribution to help us over the finish line.

Steven Wort, Ross LoForte, Brian, and Adam all produced the work that is consistent with what we have expected over the years.  Superb.

The link to the book on Amazon is here.  Just wanted to say Thanks again to the team that put this together!

As always Dear Reader Thanks for stopping by.