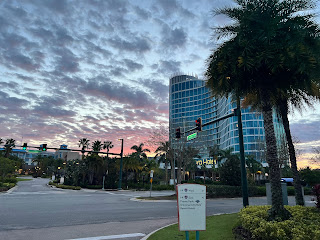 Hello Dear Reader!  Last week was a week we have been building towards since the launch of Tales from the Field.  My favorite conference every single year, Live! 360.  Live! 360 is 5 conferences in one.    TechMentor, Visual Studio Live, Artificial Intelligence Live, Cloud & Containers Live, & SQL Server Live.

Much like the SQL community became the Microsoft Azure Data Community SQL Server Live is largely about the Data Community as a whole with sessions on Synapse, COSMOS, Azure Arc Data Services, SQL Server 2022, Power BI, and many other topics.

My favorite part about this conference is the organizers and the people who attend.  Of course, a big bonus is I get to see friends of my and other Microsoft colleagues, and that is always incredible.  But these organizers are something else.  Everyone I get to come here immediately understands how great they are to work with, what an amazing job they do taking care of the attendees, the speakers, & the staff involved.  I've been presenting at Live! 360 since 2012 at the first SQL Live event.  The organizers have been the same this whole time.  They are great people, that you just love to work with. 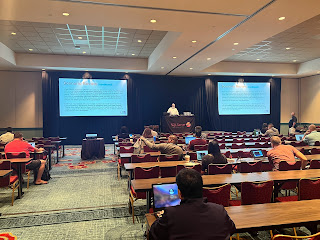 The audience at Live! 360 is also different than what I find at most community events.  This is a much more developer & enterprise customer centric conference, and it forces you to look outside of the traditional DBA events.  I started my technical life as a developer, and it is a chance to stretch my old technical skills.

This year I had some fun and created several videos where I was walking up each day.  I will post those soon, and we have a big surprise for you this week when we will drop a whole lot of Live! 360 content on Thanksgiving Day!

I hear you Dear Reader. Away we go!

This was a great event.  My colleagues Josh Luedeman (@JoshLuedeman | Twitter), Buck Woody (@BuckWoodyMSFT | Twitter), & myself started the week by delivering our Hands on SQL Server Ground to Cloud workshop on Sunday!

If you didn't make it and would like to take the course, I have good news for you.  The whole SQL Server Ground to Cloud course is posted on GitHub and you can access it here! 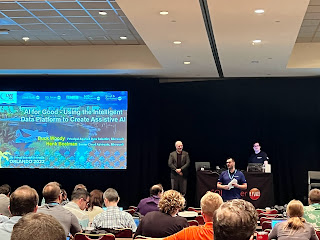 I was busy working with customers and setting up the Microsoft Booth for the conference on Monday Dear Reader.  There were great pre-con's underway by Davide Mauri (@mauridb | Twitter), Thomas LaRock (@SQLRockstar | Twitter), Karen Lopez (@DataChick | Twitter), and many more.  We had a meet and great with speakers and attendees, dinner, then bed, because we had to be up early for the keynote!

Tuesday kicked off with a Keynote by Henk Boelman (@hboelman| Twitter) and Buck Woody AI for Good - Using the Intelligent Data Platform to Create Assistive AI.

During the keynote Buck started off by showing how he assisted the owner of a grocery store with the Microsoft Intelligent Data Platform.  We used Azure Synapse Link for Azure SQL Database to create a seamless workflow migrating OLTP data to our data warehouse. Buck then used Power BI in an Azure Synapse Analytics Workspace to generate reports going against the real time data.

That's great Henk replied.  Buck helped the seller.  Henk wanted to empower the shopper.  He gave an example of someone with sight impairment.  He show how to train a voice assistant, which was amazing and a little scary.  He could then use that voice assistant, using his voice, to say anything he typed.

Henk then used ML Flow to train a synaptic model that could verify and describe items using a camera.  He then created a work flow using both models so he could scan an item and use his voice assistant to read the contents.  In this case a can of Sprite.  It not only read the can, it read out the calories and ingredients!

But that's not all.  Tuesday also had our LIVE SHOW!  Yes, we were live from Live! 360 with special guest's Thomas Larock & Buck Woody!
I Hosted!!! Want to see who won?  ....watch the video! 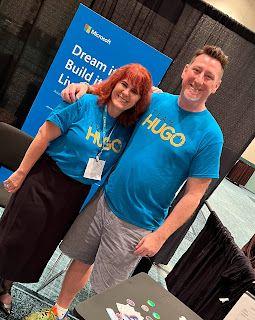 Wednesday started off with in a really nice way.  There's this really great guy on the other side of the Pond named Hugo Kornelis (@Hugo_Kornelis| Twitter).  Hugo is battling a really tough disease.  He has blogged about it prolifically. He's a good man.  He's a good friend.  We all want him to get better.  Some months ago another of his very good friends reached out to many of us, and we all spread the word behind the scenes and we all got t-shirts that said #TeamHugo.  At our conference and the PASS Summit out in Seattle, many people wore a shirt and took pictures sending our love to Hugo on Wednesday.

My friend Ginger Grant (@DestertIsleSQL | Twitter) and I had our picture taken by Buck supporting our friend. Like I said really nice way to start off the day.

The majority of Wednesday was spent working in the Microsoft Booth and interviewing some people for this Thursday's show!  Davide, Karen, and Alan Hirt (@SQLHA | Twitter) all amazing people in the own right, sat down with me for interviews.  Lunch was the Bird's of a Feather luncheon where we sit with attendees and talk about anything they want to discuss.  I had a full table and we had a lot of great discussions.  Some performance tuning, some Azure related, some analytics, some Azure Security and Azure Policy based questions.

At the end of the day we had a quick dinner out, before heading back to the dessert luau.

At this luau Tom had insisted one of his co-workers go up and participate in the show.  She repaid him by ensuring he would have to go up later.  When his name was called, I could see him shrinking away.  He clearly wanted to pull his hat down, and step further in the shadows so he would not have to go on stage.  It was apparent.  He really wanted this to pass over.

So I did what any good.... no scratch that, any truly great friend would do.

I held my hand up high and yelled at the top of my lungs, "HE'S RIGHT HERE!  THOMAS LAROCK IS RIGHT HERE! IT'S OK I FOUND HIM."

Naturally, when he took the stage the next name called could not be found.  The man on stage said he needed someone.  Thomas leaned over and gave him a name.  "BRADLEY BALL", the man bellowed.

I looked at Josh shrugged and said, "Yep.  Seems fair.", and walked up to the stage.  After that it was time to head back to the hotel room because I had to present at 8 am.  Oh, if you want to see what happened, watch the video. 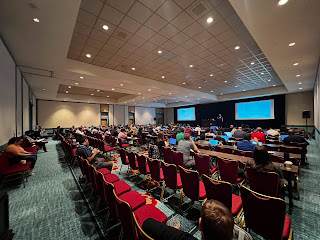 First session of the day was me presenting Indexing Internals for Developers & DBA's.  The audience was amazing.  We had almost 100 people in the room.  Great crowd, great feedback, really wonderful follow up questions and conversations with attendees.  My thanks to them, without attendees showing up in the room speakers cannot do what we do.  Over half of my audience was developers, and I love it when we discuss concepts.

SQL Server is an application.  It is written by developers.  It is used by DBA's.  We live it we breath it, but we should never forget it is an application.  Developers & DBA's must work hand in hand to exchange knowledge in order to be successful in any enterprise.  The best places I've ever worked have great interpersonal relationships that span IT teams.  They have to.  We all depend on one another. 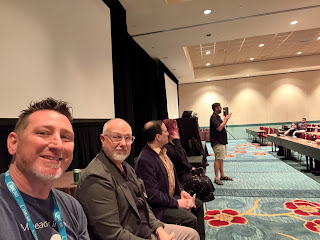 Next up was the SQL Server Live! Panel Discussion: Azure Cloud Migration Discussion. Buck, Karen, Alan (filling in for Ginger), and myself were on the panel and Thomas was our host. This was a great Q & A with the audience were they asked us questions and we gave them answers. There were lot's
of great questions from "how do I convince my boss to move to Azure", "does the fact that we are using M365 help us in a migration", to "what are the gotcha's", "what mistakes have you seen made", "what are the best strategies" were asked.  Two people working for Microsoft PG's and two Microsoft Data Platform MVP's with over 25 years of being MVP's did our best to give out the answers.

Next up I presented Azure Synapse Serverless Pools: POLARIS DEEP DIVE.  I love this session.  This is a fun one where we discuss the architectural differences between Dedicated Pools and Serverless Pools.  I show a bunch of demos, the last is a customized SQL Stress test against two external tables hitting the same object to show the concurrency scale of the Polaris engine on Serverless Pools. 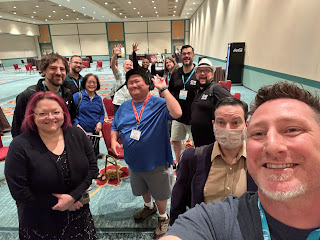 Then we talk about some architecture patterns.  I love giving this talk to user groups or conferences.  Serverless Pools are one of my favorite new products to use in Azure Synapse. I wish I got a picture of the room and the great audience.  Alas I did not, I was busy talking, answering questions, and having a
good time with the crowd and I forgot to take a picture.

The final session of the day was the NEXT? LIVE! 360 Networking Event.  Another event were we the speakers were 1:1 with the audience.  Any attendee who wanted to come and ask us questions could.  Questions we received!  We had questions on data modeling, secure data centers, replication, SQL Server 2022 and why we should upgrade from SQL 2019, tips on migrating from SQL 2012 to 2022 including a discussion on how to use the Query Data Store, and more.

All of that and we also had the Tales from the Field Community Round Table!! We recorded this last week because Josh and I were both delivering sessions during our normal broadcast time.  Great discussion up front about Thanksgiving & Time travel.

Of course, OUTSTANDING content provided to the community from:

• So you want to talk at conferences? This is what its like.  by Todd Motto Twitter @toddmotto

This was an amazing week.  A busy week.  A week to see old friends, make new ones, and help people learn.

Remember this week there are no Live Tales from the Field shows, HOWEVER we WILL DROP NEW CONTENT on Tuesday & Thursday just for you!

As always Dear Reader, I hope you have a happy holiday weekend if you celebrate, as always Thank You for stopping by.

Posted by Bradley Ball at 4:38 PM No comments: