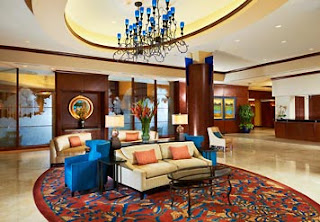 SQL Saturday 85 is a little under 5 weeks away and it will be coming to you live in Sunny Orlando Florida on September the 24th.  During a planning meeting my friend and the Fearless Leader of MagicPASS, Kendal Van Dyke (@SQLDBA | Blog), had suggested writing blogs aimed at a particular level of attendee.  Last week I took a swag at Why a Manager Should Care About SQL Saturday, and this week I thought we would shift gears and drop from the Manager level of the SQL Stack down to the Jr. DBA level.
“So Balls”, you say, “I’m a Jr. DBA why should I attend SQL Saturday?”
Great question Dear Reader let’s dive right in!
WHERE DO I START?
When I was in college I went to one of my professors before I graduated and I told him I was scared.  He smiled slyly and asked me what I was scared of.  To graduate I blurted out, I told him I feel like I’m standing on the Iceberg that sank the Titanic holding a snowball. That Iceberg was all of the IT knowledge in the world, and the snowball was all that I knew.  I told him it wasn’t enough, and that I was scared of what graduation would bring.  He smiled and told me that now I was ready.

I said nothing and thanked him for his time, knowing that this was some Yoda communicating to a Young Jedi kind of moment.  However, normally the Young Jedi somehow gets the sage advice.  I didn’t, I left just as nervous and I had arrived, save for one thing.  This brilliant Professor who had run his own software company, had been out in the outside world, and was an international lecturer thought I was ready.  That helped me because either I had this guy fooled, or he saw something I hadn’t yet recognized.   I’d prefer to believe the second one, and I still feel the best is yet to come.
Everyone who is currently a DBA, accidental or otherwise, started out where you are.  We all understand some of the things you have yet to learn.  We understand and have considered ideas that you will have in a few years.  The great thing about that is the places you have to learn are Legion, and the majority cost you nothing but your time.
So if you take me back to my first SQL Saturday I remember it felt all shiny and new.  I was a kid walking into Toy’s R Us all over again, and my mind was exploding with the possibilities of just how AWESOME this would be.   Then before you know it, SQL Saturday is over, you’re at an after party with a swag bag and your mind is still reeling from the greatness of the day.  From start to finish how do you make the most of it?
PRE-CON’S
I would suggest you start with the Pre-Con’s.  They are only $99, and that includes lunch and all the Coffee & Tea you can drink in a day.   Take a good hard look at what you business is doing and where the most growth is and plan accordingly.   At this stage in your career if you want to go the DBA path we have a great Pre-Con with Microsoft’s Buck Woody (@buckwoody | Blog ) on SQL Server Performance Tuning Using Application Analysis. Click HERE to go to Buck’s Pre-con site!
If you are curious about Business Intelligence then I would Highly Suggest going to the Pragmatic Works Business Intelligence Workshop featuring Jorge Segarra (@SQLChicken | Blog), Mike Davis (@MikeDavisSQL | Blog), Bradley Schacht (@BradleySchacht | Blog), and Kyle Walker (Blog).  Click Here to go to the Pragmatic Works Pre-Con site!
Pre-Con’s are a great way to get to know other folks that are attending as well as getting some time with the speakers as well.  There will be breaks, lunch, and plenty of other opportunity to meet people while getting some quality education from some top notch talent from the SQL Community.
THE MAIN EVENT
So now we are here, it is SQL Saturday 85.  You’ve registered you’ve signed up for and attended the Pre-con of your choice.  Let’s get to the schedule.  The great thing is we are chocked full of DBA goodness., so let’s get straight to the selections. 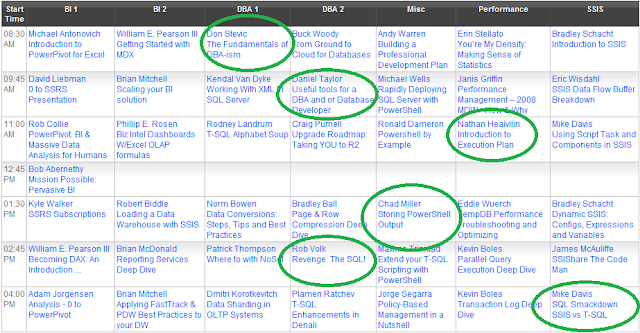 Don Stevic – The Fundamentals of DBA-ism
Daniel Taylor – Useful tools for a DBA and or Database Developer
Nathan Heaivilin- Introduction to Execution Plans
Chad Miller- Storing Powershell Output
Rob Volk- Revenge:The SQL!
Mike Davis-SQL Smackdown SSIS vs T-SQL
Don Stevic(@SQL_Superman | Blog) is a fabulous presenter.  This session is all about getting a good base fundamental knowledge as a DBA in the form of lessons learned from Don.  Don most recently presented at the MagicPASS, SQL Server User Group for Celebration Fl, and I had a chance to see Don in action at SQL Saturday 74 Jacksonville this year.  Don is a great guy and he uses a lot of pop-culture references to get some very technical ideas across.  To any DBA that hasn’t seen Don present, this is a MUST SEE.
Daniel Taylor (@DBABulldog | Blog) is a very good friend of mine.  It is my privilege to work with him every day.  He works hard, he’s damn smart, and I think he is quite funny.  Dan is one of those DBA’s that makes you better just by hanging around him.   He is a Sr. DBA and is extremely good at what he does and one of the great things Dan loves to do is figure out the best way to get the best answers as quick as possible.  This is a session that you should go to and soak up as much knowledge as you can.
Nathan Heaivilin is doing a presentation that I saw last year at SQL Saturday 49 in Orlando.  It was the second session of the day and it was great.  The last time Nathan gave this talk his wife and young child were sick and he had been up all night with them.  He walked in tired and apologized to the audience and gave what was still one of the top 3 sessions I’ve ever seen.  If you want to understand what an execution plan is, and how it can help you optimize your Database’s performance then go see Nathan!
Chad Miller (@cmille19|Blog) is a SQL Server MVP and a recipient of the Microsoft Community Contributor Award for 2011.  Chad Maintains the SQLPSX project on Codeplex.  If you are not familiar with Powershell or Chad then you should be.  Chad is a very impressive man, and he is covering how to store the output from a Powershell Script.  The formats you can store the output in, and how you get that output are things you need to know.  Powershell is only going to become more important as you become a more Senior DBA, so go get your Powershell on with Chad!
Rob Volk (@sql_r | Blog) is doing a Session called Revenge: The SQL!  This is all about how you can do cool things in SQL that will make the lives of your problematic users a proverbial hell.  You do not actually want to do these things as they could/will get you fired.  However T-SQL as a language has a lot of little tricks with it.  So go see a really awesome DBA teach you all the things you could do in SQL if you ever really wanted to mess with your users.
Mike Davis (@MikeDavisSQL | Blog), is closing out the show with SQL Smackdown SSIS vs T-SQL.  By this time in the day your head is spinning with all of your new SQL Knowledge.  Let’s toss in a little more by showing the sheer power of SSIS and T-SQL going head to head.  If you have never seen the this presentation you are in for a treat, Mike is an expert showman and this Session promises to launch itself off the top rope with all the power of a 450 Slam.  It should be a good old fashioned slobber knocker, T-SQL should get whipped harder than a government mule.  Come for the knowledge stay for the show, this session will be a treat!
There are 7 tracks going on so if what I pick doesn’t match what your interest is then take your choice over mine, and trust your gut.  So what are you waiting for Click HERE to Register for SQL Saturday 85 and I hope to see you there!
Thanks,
Brad
Posted by Bradley Ball at 11:29 PM