The Blog about SQL Saturday 232 coming shortly, but first I needed to blog about an error that I’m getting.  I presented this weekend on SQL 2014 a First Look at What’s New.  One of the demo’s I did was using Buffer Pool Extensions.

To confirm with what I’m seeing I tested this on 2 VM’s and one physical Instance.

VM2
I also confirmed these results by creating a Hyper-V VM on our Host server in the Pragmatic Works Lab.  The guest has 4 processors and 8 GB of RAM.  Max Memory set to 4096 MB.  No BPE was used on this VM.

I then used WinDirStat to confirm the results.  During my SQL Saturday presentation my VM unexpectedly ran out of space on the C drive.  This was a little confusing as I had specifically set up my SQL instance to not be installed on the C drive.

“So Balls”, you say, “What was taking up all that space on the C drive?”

KILLING ME SOFTLY… THEN NOT SO SOFTLY

This is the VM.  As you can see I didn’t go with a huge C drive, only 25 GB.  The only drive I didn’t mention above was my T drive that I used to store a database that I put a Clustered Columnstore Index on. 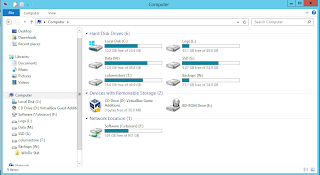 I’ve got a script that I need to blog on called MakeAdventureWorksDW_big, but I don’t have that typed up just yet.  I use that script to make my FactInternetSales_big table.  I used my friend and cohort Robert Cain’s (@ArcaneCode | Blog) script Make Adventure Works Modern for Today to make my AdventureWorks2013 Database.

My table has 42.9 Million rows in it and is a little over 8 GB.  My test for PBE was pretty simple.  I created a 15 GB BPE.  The instance has 8 GB.  My max memory for the instance was set to 4 GB.  Then I raised the max memory to 19 GB.  I ran sys.dm_os_buffer_descriptors using the is_in_bpool_extension to find the data pages as they were allocated.

I then ran the following query to load up as much data as possible.

It is just a simple select statement.  Rerunning my buffers query I could see things were loading up nicely.

My plan was to leave this query running so I could load all the data I needed to into my BPE.  That is when the C: ran out of space and the VM froze on me.

In order to catch this bug I then ran WinDirStat.  Looking under my C:\Users\SQLBALLS.PW\AppData\Local\Temp\1 folder I found this. 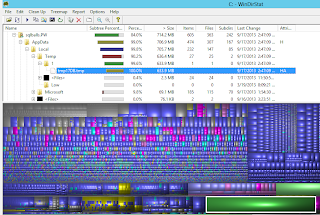 Hmmm…. right now not that bad still plenty of free space, but here’s this temp file.  Let’s fast forward to 3 minutes in.  We’re now at 2 GB.

Looking at my C Drive, I’ve now dropped from 10 GB of free space to a little over 7 GB.

The result set is large enough that this will continue until my C drive runs out of space.  If I try to delete the file I get a nice error letting me know that the file is locked by SQL Server Management Studio. 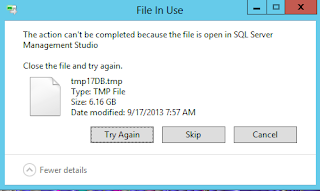 15 minutes in my C drive is looking pretty scary.  We are now in the red.  I kill the query so I can keep looking at my VM.  The C drive doesn’t free up.  I know from experience I could now delete the temp file because it is no longer in use.

I asked the question on twitter and Jason Kyle(@JasonNKyle) replied with a suggestion that maybe I was looking at a Swap file. 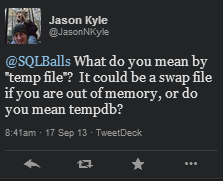 As I understand them a swap file allows an operating system to use hard disk space to simulate extra memory when the system runs low on memory.  The way this behaves is that the OS swaps a section of RAM that an idle program is using onto the hard disk to free up memory for the program you are using.  Then when you switch back to the other program the OS trades out the memory for bytes on the HD.

I don’t think this is a swap file though.  I could be wrong.

When I open one of the smaller temp files in notepad, the query results from my my query re-run so it is a much smaller result set.  This is what I see. 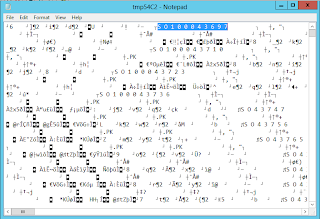 Not really useful, except that I realized the first data that I highlighted happened to be my sales order number from my query.

As I continue to mine through this I see that this is truly my query result set.

If I run this same query on my laptop.  16 GB of RAM, 6 GB Max Memory, after a restart with only around 1 GB in the buffers, I get the exact same results.  At first I thought this was an issue with Buffer Pool Extensions.  Now it looks like this is just the way queries return on SSMS.

Granted you normally don’t run million row transactions in SSMS.  Your application runs them.  So more digging to go, but I wanted to get the blog out to attract comments and help show what I was seeing.

As always Dear Reader, Thanks for stopping by.