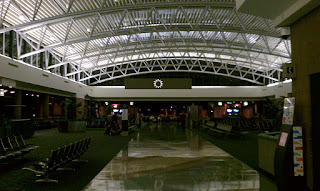 I woke up this morning around 2:45 AM.  Having packed the day before I just had to get ready to take go and I was out the door.  The drive in was a rainy one, but the nice thing about an early morning drive is that the roads were pretty empty so no traffic jams.  So a nice smooth ride into the city, and other than getting a little SQL Karaoke practice in completely uneventful.

So now  I'm in Tampa and about to board, so this will expand as the day goes along.  But here is an early morning picture of beautiful Tampa from the airport!  As you can see it is dark and just starting to come to life.  The early morning work force is out, people heading home from vacations, and those of us bleary eyed travelers heading for many other destinations.   So I'm going dark for the flight, I've got some compression topics to write on for SQL U next week. 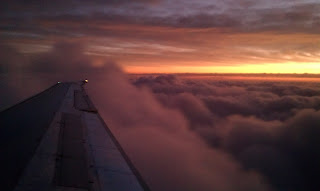 A quick picture from the clouds (34,000 feet) and I'm all back to being quite again. 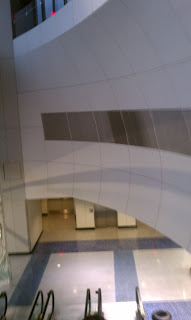 I'll be less than half way through with the travel portion of the day by now.  The big flight will be the almost 6 hours from Dallas to Seattle.  I'm looking forward to landing already, I'm not sure how much adrenalin will continue to keep me going but I'm pretty sure I'll need a nap at some point today. 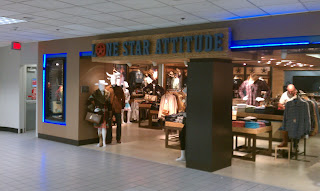 A quick coffee and bagel and I was off to the Concourse.  I met up with some folks that are heading to the Summit as well.  One is from the Tampa area and the other is Ed from Arkansas.  We hit it off talking about the Pre-Con’s we would be attending and I found a friend to share a cab to the Westin. 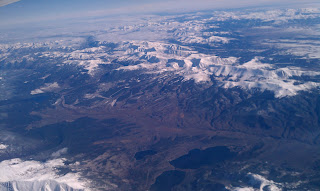 Before you know it we were boarding again.  The flight is pretty packed this time and I’m in the Isle so I would have thought no pictures from the plane window.  However there was a very nice lady from Alaska sitting against the window and when I asked she was polite enough to take a picture as we were passing over the Rockies. 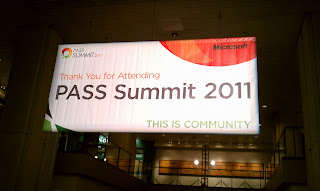 Finally on the ground.  Ed and I shared a cab ride over to the Westin, as they did not have a shuttle at the airport.  The Summit is a wonderful opportunity to meet new people, as we come together to learn about SQL Server with one another, and it was fantastic to meet Ed.   We agreed to meet up at the lobby and find some food, I was going on a bagel and some yogurt for the day, Ed was hard core and hadn’t had a thing. 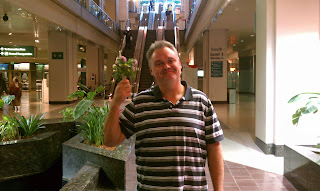 While in the lobby I Tweeted the plan that we had, and quickly heard back from the SQL Dynamic Duo of Karla (@KarlaKay22 | Blog ) and Rodney Landrum (@SQLBeat | Blog).  They were at the Tap House, which had some of the best jumbilia I’ve ever had.

From here I had a great time with new, old, and current friends.  It is amazing how far you can travel in a day, to remember the things that you’ve already known.  Several games of pool later, I still can’t play worth a damn.  I have the occasional flashes of brilliance that peter out after a max of three good shots.  But playing lousy pool is a lot of fun when you’ve got friends to play it with.

From there we did a walk about the city and looked at several different destinations.  We headed over to the Convention Center and Registered for the reason we are all here.   It was amazing to see all of the people that came to register early.  A lot of them were people I had met before, and a couple whom I had been wanting to meet.  I got to met Brent Ozar (@BrentO | Blog) who is taller and younger than I imagined.  And I mean taller folks.  I’m not a short guy, but I’m right on the 6 foot mark, so when people are taller than me I notice.   And did I mention he looked younger than I expected J.

With that Rodney, Karla, and myself set off for a hole in the wall noodle shop for a quick fix of our favorite delicacies, I can never resist a good Pad-Thai.  And with that I’m heading back to finish up some work on Compression.  Time to get a good nights rest.  Tomorrow starts the Pre-con’s.